Europe’s monthly online gambling news EGBA’s manifesto for the new EU term As Europeans head to the polls on 23-26 May, the European Gaming and Betting Association (EGBA) is calling on the incoming European Parliament and Commission to act in the online gambling sector to ensure Europe’s online gamblers are better protected. With online betting now representing more than 20% of the EU gambling market, the lack of common EU rules for online betting is jeopardising players safety when they play online. That’s because EU countries have different rules for regulating online gambling and there are significant disparities in the quality of these national regulations, including the consumer protections available to online gamblers. Read more about the manifesto in the weblink below. Source: EGBA. > View online EGBA’s Online Gambling Focus – Spring 2019 - Intellectual property rights Intellectual property (IP) rights and their relationship with online gambling is the... 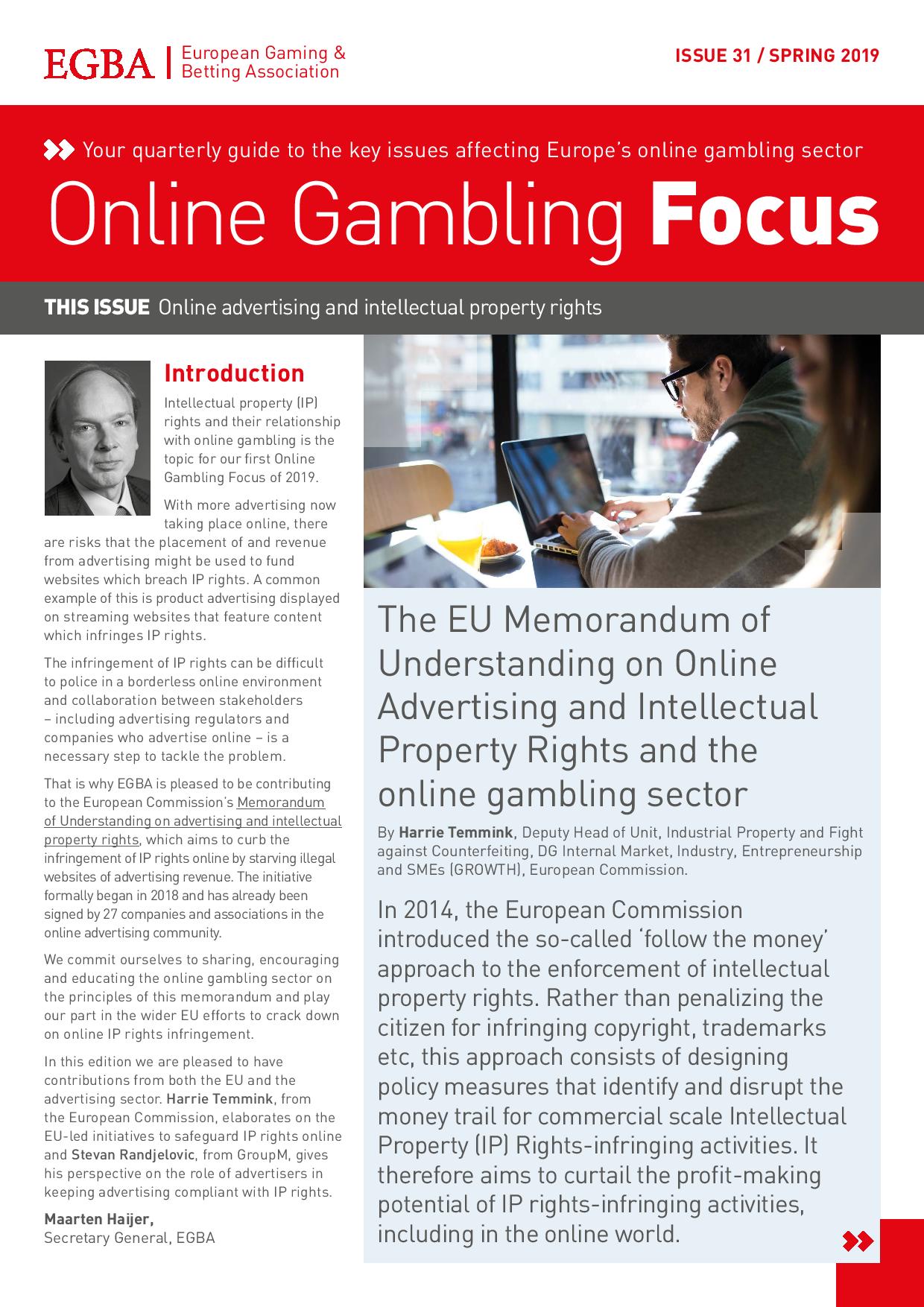 Intellectual property (IP) rights and their relationship with online gambling is the topic for our first Online Gambling Focus of 2019. With more advertising now taking place online, there are risks that the placement of and revenue from advertising might be used to fund websites which breach IP rights. A common example of this is product advertising displayed on streaming websites that feature content which infringes IP rights. In this edition we are pleased to have contributions from both the EU and the advertising sector. Harrie Temmink, from the European Commission, elaborates on the EU-led initiatives to safeguard IP rights online and Stevan Randjelovic, from GroupM, gives his perspective on the role of advertisers in keeping advertising compliant with IP rights. Don’t want to miss the latest news? Sign up here to receive our monthly newsletter direct to your inbox.

Europe’s monthly online gambling news EGBA event: 2019 European Elections: The Case For And Against The EU On 10 April, the European Gaming and Betting Association (EGBA) co-hosted with EU media outlet POLITICO an event “2019 European Elections: The Case For and Against the EU” which brought together political experts, bookmakers, pollsters and journalists to debate the future of the European Union and their predictions around the upcoming European elections. Participating at the event was Matthew Shaddick, Head of Politics at Ladbrokes, and Mr Henrik Tjärnström, the CEO of Kindred Group, who delivered a keynote speech about why the incoming European Commission and Parliament need to make the EU single market work better for Europe’s online consumers and digital sectors, like online gambling. You can watch the full event (80mins) via the weblink below. Source: EGBA. > View online Europe’s Single Market rules need to be better enforced to benefit...